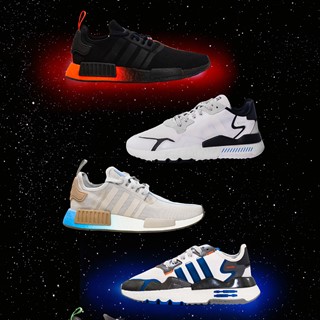 Black Friday promises to be a good day for sneaker fans and Star Wars fans alike. On November 29th, Adidas will be dropping the final capsule in its 2019 Star Wars collection. Called the “Character” pack, each of the shoes in this drop is styled to pay homage to one of the characters in the Star Wars films. Each character is paired with a classic Adidas silhouette, and unlike the previous two drops, these shoes are are all meant to be lifestyle shoes, rather than athletic sneakers.

No Star Wars character collection would be complete without paying homage to R2-D2, easily the most popular droid in the films and arguably one of their most popular characters. R2 is one of two Nite Jogger silhouettes in this drop. The shoe features reflective details that mimic the droid’s metallic outer shell, and is decorated with various logos and decals, including a lace charm, a custom Adidas stamp with an image of the character, and stylized crests on the heel.

The other Nite Jogger silhouette pays tribute to an entire class of character – the iconic Stormtroopers, the soldiers of the Empire. Like the R2 colorway, the Stormtrooper shoe also features reflective detailing, but is colored in black and white (of course), and features the words “OPEN THE BLAST DOORS!” on the boost. Above the words are an image of the small blue lights that appear above the blast doors in the original trilogy, providing a small hint of color in this otherwise monochrome colorway.

The NMD silhouette also gets paired with two different characters in this release. One is Darth Vader, decked out almost entirely in black with a bit of sharp red highlighting on the tongue. The sole of the shoe begins in a bright red heel that slowly fades to a black toe, giving this shoe a truly evil look. In addition to the various logos, stamps, and charms, the heel of the Vader colorway reads “JOIN ME AND TOGETHER WE CAN RULE THE GALAXY.”

The other silhouette is for Yoda, the small Jedi master whose powers of good are ultimately passed on to Luke Skywalker in The Empire Strikes Back, giving him the knowledge he needs to defeat Darth Vader and the Emperor in Episode VI. Like its Vader counterpart, the Yoda colorway is also entirely black, with green highlights on the heel that nod to both the small Jedi’s green skin and the color of the lightsaber he wields in the prequel trilogy. The heel starts out a bright lightsaber green, but fades out to a crisp white toe, giving this shoe a bit more contrast than the Vader colorway. The slogan on the heel reads “DO. OR DO NOT. THERE IS NO TRY.”

Unlike the two previous drops this month, this final release is also expected to include two colorways designed exclusively for women. These colorways are both NMD women’s silhouettes. The first is for the character Rey, the young protagonist of the most recent trilogy. Rey’s upper is a faded khaki color, a tribute to the light brown robes she wears throughout the trilogy. Blue accents on the tongue pay tribute to the blue lightsaber she wields. Like the two men’s colorways, Rey’s also features a fade along the sole, starting with a lightsaber blue heel that fades out to a white toe (she fights for the light side, after all). The slogan on the heel reads “LIGHT. DARKNESS. A BALANCE.”

Last (but certainly not least), the final character being honored in this drop is Princess Leia. Leia’s shoe is actually the most colorful shoe in the drop, featuring a stippled white, black, tan, and maroon upper that honors her appearances throughout the original and most recent trilogies. The laces are black with gold accents, and the fadeout on the sole begins with a gold heel that fades out to a white toe. The slogan on the heel reads “HOPE.”

The Three Top-Selling Sneakers of 2019

Most Popular Yeezy Silhouettes of 2019