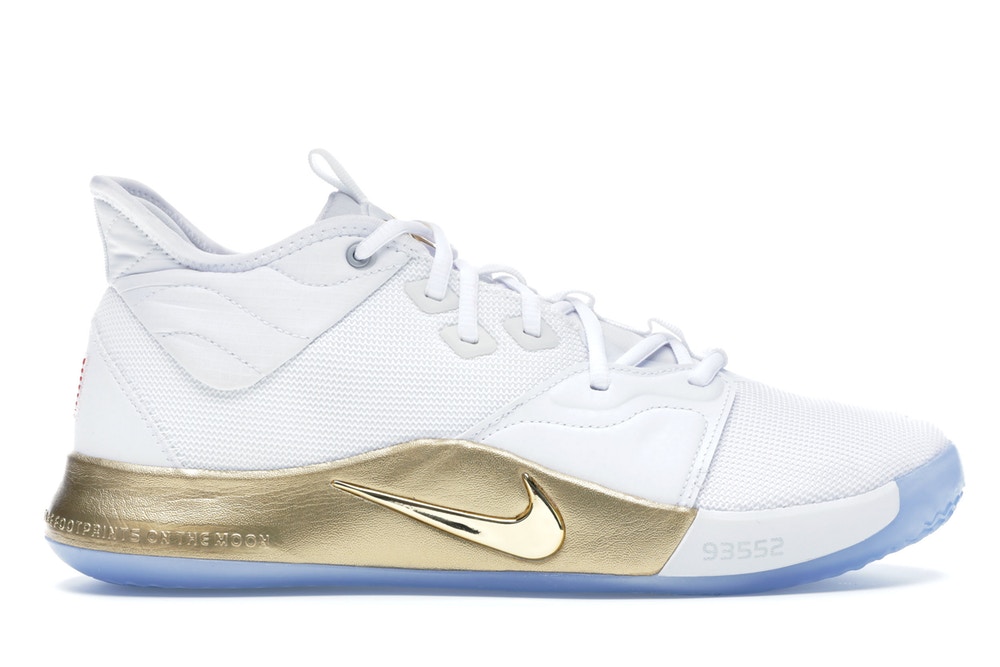 Basketball star Paul George grew up in Palmdale, California. In a nod to the NASA research center that is also based in his hometown, the Nike imprint released a NASA inspired fashion collection in the summer of 2019. This collection isn’t just inspired by space exploration – the official collaboration with NASA features patches, NASA’s signature blue and orange colors, and other official labelling to give the entire collection an authentic feel. While the full collection features a variety of items, including track suits, sweatpants, and backpacks, the main attraction of the summer release are the sneakers. The shoes feature the Palmdale city zipcode and an inspirational quote: “Don’t tell me the sky’s the limit when there are footprints on the moon.” George himself said that the shoes were for “kids who want to fly, whether as professional athletes or astronauts,” and expressed the wish that the collaboration would inspire the wearers to become more invested in both athletics and in space exploration.

The shoes aren’t just a fashion collaboration. Nike designers also met with NASA designers to share technologies as well as designs. Improvements were made to the shoe’s traction, comfort, fit, and durability that were suggested and implemented using NASA technology, making these sneakers space-age in both look and feel. During the collaboration, Paul George himself even shadowed a NASA astronaut to get a better understanding of what a day on the job looks like, with the intention of creating a shoe that married the discipline of NASA training with the dedication of a professional athlete. Many of Nike’s technological inspiration for the shoe’s materials and make were taken from NASA’s ability to make equipment able to withstand some of the most extreme environments in our universe with lightweight materials. As such, the shoe’s lightweight feel and multi-direction supports in the heels are inspired by the same feel and requirements in NASA equipment.

In addition to the shoe’s space-grade technology, nods to NASA and space exploration can be found in the shoes’ aesthetic designs as well. The initial drop in January featured two colorways, the PG 3 NASA and the PG 3 NASA 50th. The PG 3 NASA features the black and orange of NASA’s official jumpsuits, silver foil on the collar, tongue, and sole, and the NASA flight patch on the heel. If that isn’t cool enough, other geeky nods to NASA include a morse-code message on the heel and a red “Remove Before Flight” tag. The tongue features both the PG logo and an American flag, with the Nike swoop on the side of the thick PG sole. The PG 3 NASA 50th is an all-silver colorway released to coincide with the 50th anniversary of the Apollo 11 landing. The 3M reflective paneling makes the shoe look distinctly science fiction, and also features the NASA flight patch on the heel. Both colorways add foam and a rip-stop collar over the sole and support technology from the PG 2. The traction on the shoes’ outer sole was inspired by moon craters and calculated using algorithms that analyzed the way the wearer’s foot moves in a PG shoe.  Since July, Paul George’s official collaboration has released a few different colorways, including a white and gold “Apollo Missions” and “Metallic” colorway. In addition to these space-inspired releases, Nike has released some space-inspired sneakers in other imprints. The Nike Air VaporMax 2019, for example, comes in both a gold and silver colorway, and looks like something you might see in the gym on the USS Enterprise. The Nike AirMax 270 Blowfin is a chunkier blue and gold model that enhances a classic silhouette with some very futuristic design features. The Nike Air Max Lunar 90 SP (as the name suggests) has an upper that is designed to look like it’s pocked with craters like the surface of the moon itself. Space is definitely on the brain for Nike this year, so keep an eye out for more NASA-inspired gear from Paul George and other space-related Nike colorways over the coming holiday season.