Last price update was: January 20, 2022 1:40 am
× Product prices and availability are accurate as of the date/time indicated and are subject to change. Any price and availability information displayed on Amazon at the time of purchase will apply to the purchase of this product. 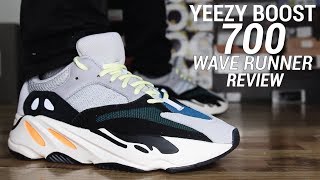 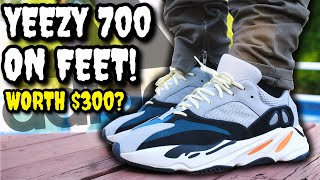 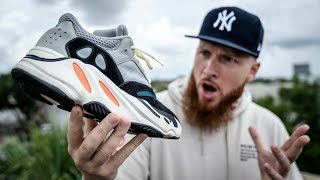 Tomorrow Adidas’ Yeezy line is scheduled to drop the Yeezy 700 “Magnet,” but many of the design elements in tomorrow’s release are nods back to the Yeezy 700 “Waverunner” colorway. The Waverunner, in many ways, is an iconic look, at least for the Yeezy line. First released in November 2017, this shoe sparked a cultural fad for chunky-soled “Dad shoes” that still hasn’t quite died off. Re-released in September 2018, the Waverunner was re-released for a second time at the end of last month, though this time with a range of family sizes, rather than just the one design for adult men. The color palette in this capsule will be familiar to anyone who follows any of Kanye West’s clothing design projects. Shades of deep blue, black, grey, green, and white gives this shoe an understated but sophisticated look. Though subtle, this shoe is actually much brighter than many of the Yeezy 700 colorways that have been released since, especially with its bright yellow laces. A lace mesh upper with suede and leather accents gives this casual shoe a bit of an athletic aesthetic, though anyone can see from the thick sole that this is not a workout shoe. Two orange accents in the white sole add a splash of color to an otherwise muted color scheme, making for a tasteful contrast and giving the shoe a bit of a retro look. The full Boost footbed ensures that this shoe is as comfortable as it is stylish.

While this shoe is designed with male and masculine buyers in mind, the August 2019 re-release included smaller designs for kids and infants. Originally priced at $300 on the Adidas website for the adult size and $150 for the younger sizes, this release is still available for purchase, but on some online marketplaces the prices have spiked as the supply starts to dwindle.

Adidas Yeezy Boost 700 "Wave Runner" - B75571
$645.00
March 12, 2020 2:07 am
× Product prices and availability are accurate as of the date/time indicated and are subject to change. Any price and availability information displayed on Amazon.com (Amazon.in, Amazon.co.uk, Amazon.de, etc) at the time of purchase will apply to the purchase of this product.
2 new from $645.00
Buy Now