Last price update was: November 25, 2022 6:24 pm
× Product prices and availability are accurate as of the date/time indicated and are subject to change. Any price and availability information displayed on Amazon at the time of purchase will apply to the purchase of this product. 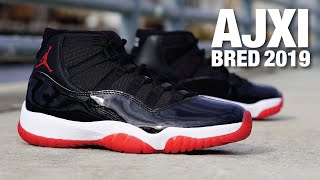 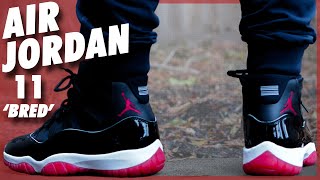 The Air Jordan 11 Bred is one of the most iconic releases in Air Jordan history. It’s seen a number of different iterations, the most recent of which will be dropping in December 2019. First worn by Michael Jordan during the 1996 playoff season, these shoes earned him yet another championship, as well as an NBA finals MVP. The original silhouette is a chunky high top with a patent leather upper. The color scheme is the Jordan colors of black, red, and white. While there have been slight changes in design and color placement over the years, the high-top silhouette, the patent leather upper, and the black, red, and white color scheme have remained constants.

The 2019 release promises to be no different. While Jordan has been extremely secretive about it, and very few pictures have been release, fans can count on it having the familiar Jordan XI Bred look. 2019 has seen a dramatic increase in demand for retro and vintage style shoes, and so it’s reasonable to expect that the 2019 release may be closer to the original drop than any of its previous re-releases. However, improvements in sneaker technology also promise to make it a far superior sports shoe than anything ever worn on the court by Michale Jordan himself.

This is such a high-demand shoe that it’s average price hovers around $300, even on internet marketplaces like Amazon. There has been no indication of how the 2019 sneakers will be priced, but it’s reasonable to expect that this will be a high-value drop. Just in time for the holiday season, the 2019 Jordan XI Bred is scheduled to drop on December 14th. In the meantime, however, there are so many iterations of the Jordan XI Bred floating around on the internet that you’ll surely be able to get your hands on a pair in time for the holidays.

Jordan Air 11 XI Retro Bred Men's Basketball Shoes Black/Varsity...
$589.38
March 18, 2020 7:15 am
× Product prices and availability are accurate as of the date/time indicated and are subject to change. Any price and availability information displayed on Amazon.com (Amazon.in, Amazon.co.uk, Amazon.de, etc) at the time of purchase will apply to the purchase of this product.
1 new from $589.38
Buy Now