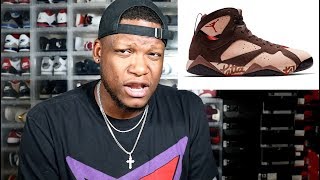 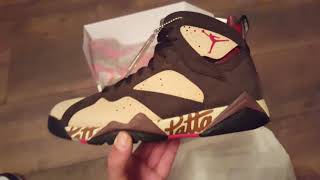 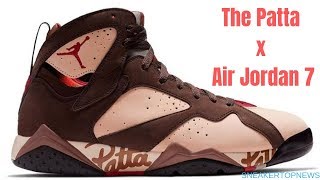 Dutch streetwear and sneaker boutique, Patta is scheduled to team up with Jordan Brand for a fresh take on a classic silhouette. The Patta x Air Jordan 7 was originally rumored to be an exclusive release at Patta’s location in Amsterdam. Fortunately, a much more inclusive drop will take place in June at select Jordan Brand retailers for $200. Both the shimmer/ tough red-velvet brown colorway and icicle/ sequoia-river rock-light crimson colorway will flaunt exclusive Patta branding at the midsole. Earth tones and suede overlays distinguish this sneaker as a functional piece of art. At the pull tab, you’ll notice “Team Patta” written in quirky, computer font. Burgundy hits at the Jumpman, tongue, and outsole give the Patta x Air Jordan 7 a similar appearance to the infamous “Bordeaux” colorway. Founded in 2004, Patta prides itself in providing desirable footwear options in an effort to add excitement to the Dutch streetwear scene. A glance at the brand’s portfolio will reveal prior collaborations with Nike, Adidas, Converse, Asics, and Reebok.

The Air Jordan 7 is largely regarded as the most iconic Jordans of the series. Originally released in 1992, Michael and the Chicago Bulls would go on to win their 2nd NBA Championship, vs the Portland Trail Blazers. Unlike many of the previous models, the Air Jordan 7 did away with the visible Nike Air unit. The colorful detailing on the sneakers was said to be inspired by West African Tribal culture. Pairs are already circulating resale markets such as Stockx, ranging from $600-$7000! Could this be indicative of the outrageous demand concerning the Patta x Air Jordan 7? Whether you choose to rock these with your favorite denim or elect to pull out the gym shorts, you’re sure to break necks with these! June can’t come soon enough!