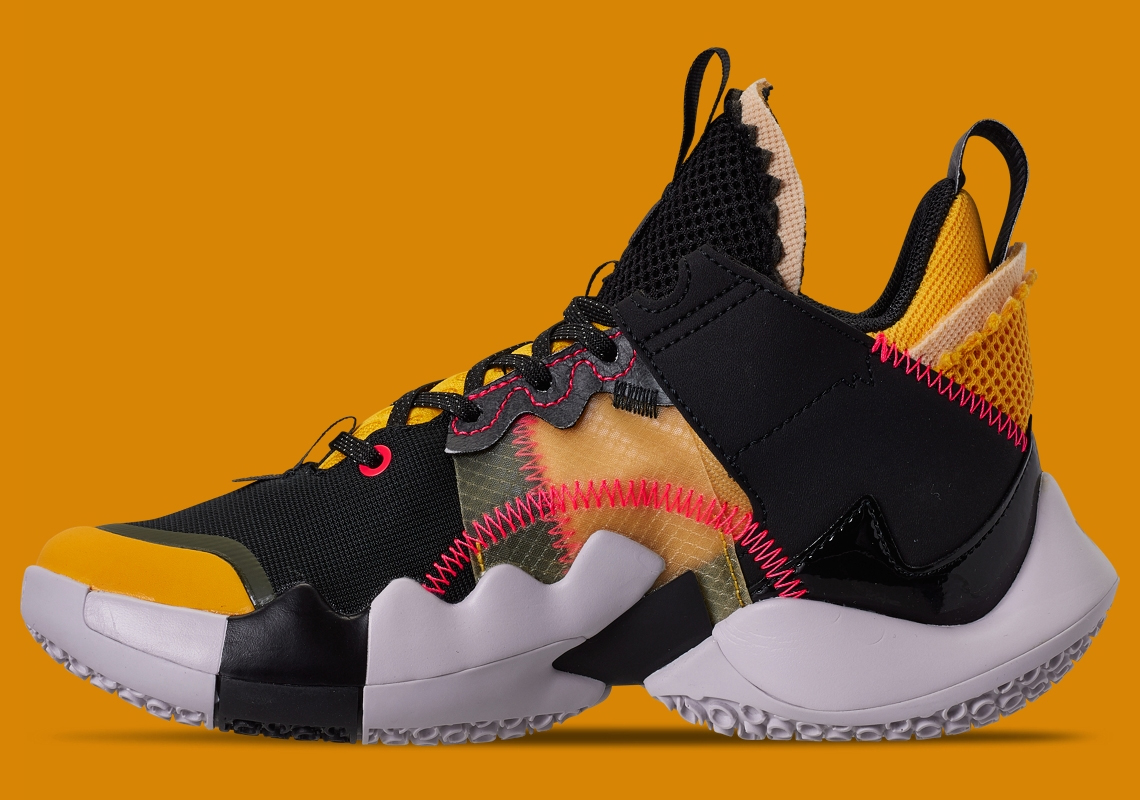 Jordan is celebrating Russell Westbrook’s 31st birthday the way it celebrates most important dates – with a sneaker drop. The Why Not Zero .2 SE “Birthday” colorway was released yesterday, November 12th, as a special tribute. Official pictures of the new shoes promise a yellow-and-black upper with red accents on the flyware and stitching, giving these shoes a bright and fiery look. A translucent quarter overlay covers a small text graphic, and black leather and suede accents add sharp contrast to the yellow “Amarillo” color scheme. To commemorate the birthday event, there is a birthday candle printed on the tongue tag of the left shoe and the right heel tab features an image of the astrological sign Scorpio, which (of course) is the sun sign of the Brodie himself. The highest tribute of all, of course, is that these shoes aren’t just fashionable sneakers – they are designed to be worn on the court and in the gym as well. The split midsole is bolstered with Zoom Air cushioning to provide both support and comfort to the wearer. Materials include suede, leather, and a synthetic textile mix on the uppers that promise to keep this shoe looking good even after years of wear and tear. Initially released as the “Scorpio” colorway to commemorate Westbrook’s birth month and corresponding astrological personality, these shoes are designed to match the intensity and style that the former MVP brings to the court with every game he plays.

The Why Not line is a relatively new addition to the Jordan brand. Debuting in January of 2019, the line only has two current silhouettes. This birthday drop is one of just a handful of colorways. The hype around its release is a testament to how popular Westbrook is as a player, and how much sneaker fans still anticipate new Jordan drops of any kind. Westbrook’s line is another line that successfully manages to combine fashion and athleticism, with high fashion colorways like the Halloween “Mummy” release or the “Seoul” and “Tokyo” colorways earlier this year that, despite their flashy appearance, still have the durability to be worn as athletic shoes. There are no more Why Not releases scheduled for the rest of 2019, but the success of this shoe indicates that we can probably expect more Why Not silhouettes in 2020.

Much thought and care has obviously gone into Westbrook’s birthday drop. Priced at $130, these shoes promise to be a fashionable pick for anyone during Scorpio season, whether they’re being worn on the street or on the court. However, Westbrook is hardly the first birthday Jordan has celebrated with a shoe. Last year, the brand celebrated Tinker Hatfield’s 66th birthday with an entire week’s worth of new releases. From April 30th-May 5th, the brand released five new commemorate colorways of the Air Jordan 3. It’s not just basketball players or shoe designers that get this kind of special attention, either. Last September, the brand celebrated actor and musician Will Smith’s 50th birthday with the release of the Air Jordan 5 “Fresh Prince” colorway.

Of course, February 17th has been a major release date throughout the brand’s history, as it’s the birthdate of MJ himself. This year’s February 17th drop was also a Why Not Zero .2, called “Own the Game” and priced at $125. This colorway was intentionally scheduled to drop on Michael Jordan’s birthday because it was initially designed as a Black History Month release, recognizing how black players have contributed to the game of basketball. In 2017, three different colorways were dropped on the 17th of February, two of which were women’s shoes that are still in high demand two years later.

Most Popular Yeezy Silhouettes of 2019